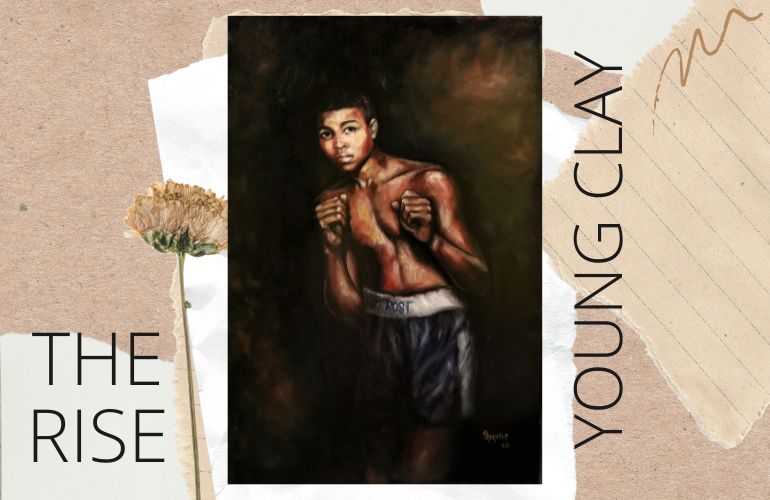 “If you want to achieve success, then don't doubt your dreams”. This statement reflects the true dedication in the case of the legendary American professional boxer Cassius Marcellus Clay Jr. (aka Muhammed Ali), born on the 17th of January 1942 in Louisville, Kentucky (U.S.), into an ordinary family.

Muhammed Ali began his training as an amateur boxer at the age of 12. His dream of becoming a boxer ignited his willingness and determination. Later on, with unbelievable persistence and focus, at the tender age of 18, with the dream of becoming the best boxer, he won a gold medal in the light heavyweight division at the 1960s summer Olympics in Rome.

This was a remarkable win and the beginning and rise of “The Greatest". Muhammad Ali developed a passion for being a professional boxer after this win. A dreamer, with continuous effort and training, made him a true legend.

This portrait of ‘Muhammad Ali- Young Clay Original Oil Painting On Canvas’, in an orthodox stance pose, says a lot about determination, endurance, and emotional affinity with boxing. The artist of this portrait tried to capture Ali’s vulnerability before his success with a flaunt less craft for an emotive connotation for boxing lovers.

This is, in a true sense, a priceless painting from the past and shows a time before achieving excellence. This is a 100% handmade original portrait painting on canvas made with oil paint. It is a perfect depiction of a dreamer and spreads motivation to all aspiring sportsmen. 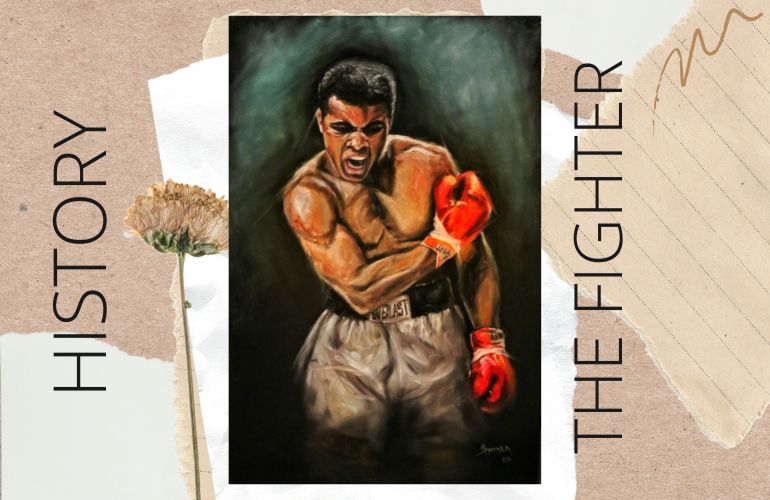 Muhammad Ali shows impeccable devotion to his game, and his perseverance is commendable. On February 25, 1964, a historic match was played between Ali and Sonny Liston for boxing's World Heavyweight Championship. For this match, there is a mix of controversial statements and preconceived notions from the world of sports and big names.

This fight was one of the most controversial in the sport's history, popularly referred to as the Liston–Clay fight. This portrait of ‘Muhammad Ali- The Fight Original Acrylic Painting On Canvas’ is inspired by the iconic winning moment of the same fighting event, which is considered the greatest sports moment of the twentieth century.

In a major upset, Ali knocked out Sonny Liston in the seventh round and clearly won the title of boxing's world heavyweight championship. The stamina, punching speed, and courage of Ali in the ring are all there and witnessed by the massive audience. Ali quoted after his historic win:

"I was indeed scared of Liston. I had to convince myself I was the greatest before I could convince the world... "

This portrait painting on the canvas is inspired by the most iconic photo in the history of sports to date, making it a masterpiece and beyond the price of the art. A true sports and boxing admirer knows the true value of this iconic ‘Muhammad Ali knocks out Sonny Liston’ canvas painting.

The painting is an original, 100% handcrafted portrait on canvas. The artist has tried her best to show the epic movements of Ali during the fight through some flash edits on canvas, making it a rejuvenating and lively emitter of courage and strength. A truly motivating, enthralling, and captivating portrait is best suitable for gifting to a boxing lover or for use in a sports room, bedroom, game room, bar, or tribute room, and can be used as modern wall art decor. This is made of acrylic with a glossy varnish finish. 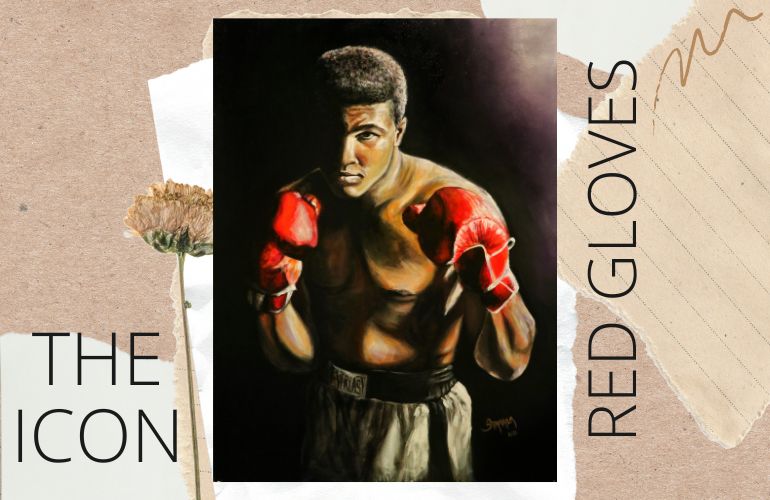 The legendary heavyweight Ali became the first fighter to win the world heavyweight title on three separate occasions and defend it a record 19 times. Not just that, in a total of 61 fights, Ali has won 56. Of these, 37 were won by knockout. All these achievements made Ali’s career one of the most exceptional and highly respected until his retirement from the sport in 1981.

Ali was regarded as one of the most influential and eminent sporting icons of the 20th century. Besides his sporting career, Ali has made two music albums and has been nominated twice for a Grammy Award. His remarkable contributions to philanthropy and humanitarianism made him not just “The Greatest” but the “People’s Champion”.

Muhammad Ali was diagnosed with Parkinson's disease in 1984, after four years of his retirement. In 2016, at the age of 74, Ali left this world in deep shock. Throughout his life, Ali became the true inspiration for many and maintained a bright outlook on others' lives.

This is a unique and contemporary artwork; “Muhammad Ali—Red Gloves Original Acrylic Painting On Canvas". This orthodox stance postured painting is full of lively characteristics. The artist used acrylic paint on canvas to create this figurative, real-life legend painting with a flaunt less craft and artistic approach.

The Eid Special Gift Guide 2022: Give the Gift of Love This Holy Season!

6 Reasons You Should Shop With Home-Grown Businesses

The Eid Special Gift Guide 2022: Give the Gift of Love This Holy Season!

6 Reasons You Should Shop With Home-Grown Businesses